For the last year I’ve been taking a photo of my garden from my bathroom window on the 1st (or thereabouts) of every month – and posting on Instagram.  Here’s the 2018 collection so far.

So this is New Year’s Day.  A mess.  You can still see some of the summer flowering – check out the Hellenium in the bottom left-hand corner (unfortunately I don’t think it’s survived….)  I’ve deliberately left most of the growth from last year for the birds.  In previous years I’ve had goldfinches use the remains of my Japanese Anenomes to build a nest in the tree next door and this year I’ve seen various tits enjoy the heads of my helianthus, so I wasn’t in a rush to tidy up. 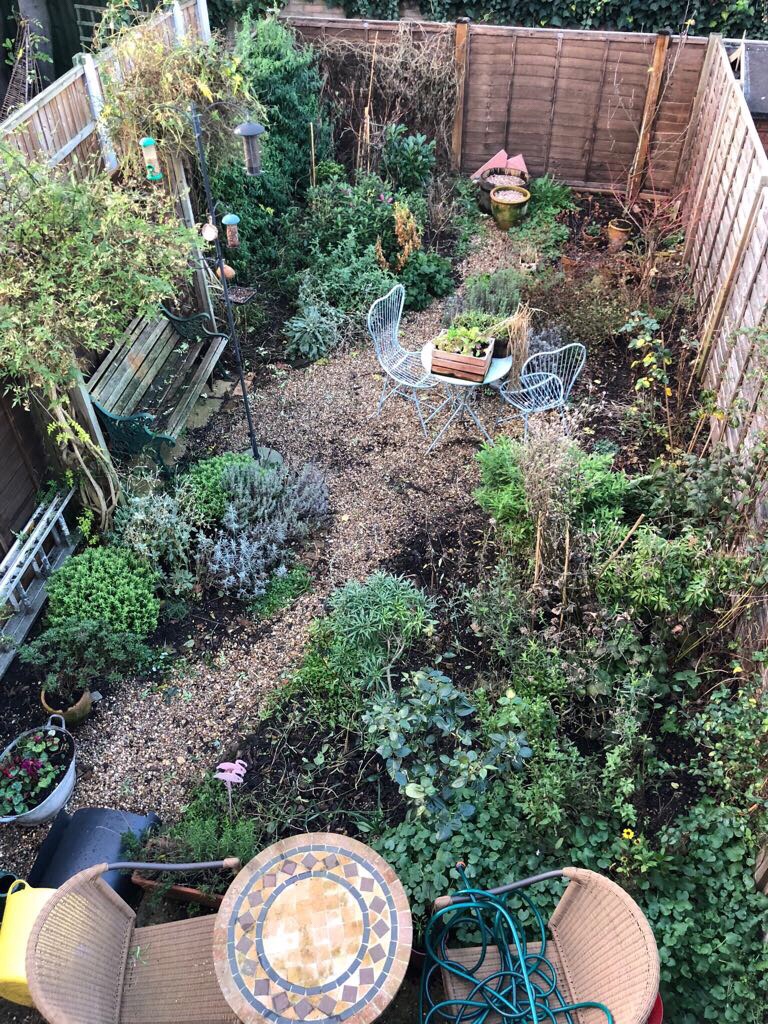 And March.  Now this I wasn’t expecting for the first day of meteorological Spring but then it had been a long, cold, winter….  Still messy but you can see the start of the tulips in the pots at the back of the garden.

April: Things starting to look a little tidier – note that the dead climbers on the back fence have gone. (My clematis pruning fail story is for another day….)  Tulips in pots are coming along, daffodils are out and I’ve potted up some pretty pale pink primulas for the table. Not much colour yet – it’s been a late Spring this year…..

May.  After a few brief days of summer in April, finally some colour. Apple tree in leaf – actually past it’s peak blossom.  A few welsh poppies and (Spanish) bluebells.  Hops on the back fence have seemingly appeared from nowhere.  (Still not talking about my clematis pruning fail….)  Salix Flamingo tree in leaf.  This is my 2nd one of these.  The first I was given as a birthday present by my partner in April 2016 and it died last spring, just in time for my next birthday for which he gave me another one – so far, so good!   Tulips in pots starting to flower and you can see signs of my seed sowing and propagating adventures; sunflowers from Gardeners’ World mag and cuttings of a Penstemon I took last August which I’m hoping will do alright as the parent plant has now died…..

So I guess I’ll update this blog as the year progresses……..